Building history and the collection 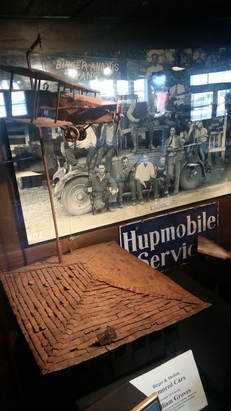 Going to the 1910s Franklin County Garage Museum in Benton is like stepping back in time.  With a variety of antique vehicles and other automotive items, visitors can see what transportation needs were like after the turn of the 20th century.

“We are very proud of the car museum,” says Bob Rea, Franklin County Historic Preservation Society President and one of the museum’s co-founders.  The building was constructed in 1910 and originally housed the first Ford franchise in Franklin County—the Dimond Motor Company, which opened in 1911.  Like many other automobile dealerships at the time, the building was constructed of brick and reinforced concrete.  This form of fire-proof construction was necessary with the storage of gasoline on the premises.  The unique barrel-shaped roof design allowed for wide open spaces to work and the dates back to ancient architecture.

With the first Ford Model T automobile produced in 1908, the Dimond brothers saw the prospects of a successful business in the thriving community.  At the time, coal mines were expanding throughout the county, and the population of Benton grew from around 2,500 to 10,000 in a short time.
​
“With people going to work in the mines, this was a period of great prosperity in Franklin County.  There were many land developers here and company houses went up,” Rea said.  “And with the new jobs, the demand for cars was a necessity.”

The first cars in Benton arrived by rail from Detroit at the Illinois Central freight depot on South Main Street, approximately one-fourth mile from the garage.  They arrived partially assembled with four cars in each crates.  Shipped upright, the cars were lifted out of the crates using tools featured on the south wall of the museum.  The mechanics added the wheels and drove them to the garage for the finishing touches.  This included fenders, windshields, and all the ‘bells and whistles’.

As the world entered the ‘war to end all wars’, business continued to be steady.  The Dimond brothers sold the Ford franchise in 1916 to R. J. Kirkpatrick.[i]  Without the guidelines of a franchise, the dealership was able to expand offerings to Chevrolets, Dorts[ii] and Oaklands[iii].   However, after the Armistice in 1918, “…the Dimond spirit for development work began to show in the increase of business and territory by the organization.”  Around this point, L.C. Rea joined the company and became a manager at the Benton office.  In 1919, branch offices expanded with sales and service rooms were established in Marion, Christopher and Herrin.  Over 2,000 cars were sold in 1919, a record for all Chevrolet-affiliated dealerships in Illinois.

During the 1920s, Dimond Motor Sales changed hands several times.  Around 1926, A. A. Thomann, who was originally from St. Louis, bought the business and operated a Nash[iv] dealership there until the early 1950s.  After the dealership closed, Thomann’s son, Anton, moved from Centralia and ran a mechanic shop until he developed eye site problems.  “A lot of area car dealers had him do their front end work and balance tires,” said his daughter, Jan Thomann Compton, who still lives in Benton.  “But he worked by himself.”

Rea said the business later closed and plans were for it to be torn down to make way for a parking lot.  That was when the Franklin County Historic Preservation Society stepped and plans for the museum started to take shape.

The Making of a Museum
At the time, the Franklin County Historic Preservation Society consisted of primarily three individuals:  Robert Rea, Gary Kraft, and John Gulley.  The group had recently finished developing the Historic Jail Museum and was looking for another project.  “We thought this (building) would be a great little museum,” said Gary Kraft.  “No other town in our area had anything like it.” Gulley, who minored in museum studies at Southern Illinois University--Carbondale, said he got involved in the project primarily because of Bob Rea.

“There is no question that he was the driving force,” Gulley said.  “But I also felt that it was important that the building be saved.”  The first time he entered the old Dimond Motor Sales Company garage, Gulley said it was like going back to the early 1900s.  Not only did it house the first automobile dealership in the county, but much of the original equipment was still intact - including a line-driven press with a break machine and drill press.  “It was like a time capsule,” he said.  “It was like going back some 50 to 60 years ago.”

The society obtained a state tourism attraction grant for $55,000[v].  This was matched by the City of Benton who became the owner of the building in 1998.  Bob Rea said he is very proud of the garage museum and that they were able to save the building.  “A lot of hard work and determination went into this project,” he said.  “And some day, when we are gone it will still be here and reach its potential.”  To assist with staffing, an agreement was reached to house the Benton-West City Chamber of Commerce office in the museum. The museum officially opened on April 1, 2000; and since that time, there have been visitors from throughout the world, including German and Australia.  Along with travelers and vacationers, schools from throughout the area tour of the facility.

Pat Wenberg, former Executive Secretary for the Benton / West City Area Chamber of Commerce, served as the official tour guide for several years.  She said many of the visitors share memories of the past, and a vast majority of them are from out of town.

Historical Highlights in the Museum
Six Antique Cars Gary Kraft, who owns an auto repair shop, actually restored two of the vehicles that are on display—the 1926 Model T coupe and the 1949 Ford Woodie station wagon (No longer in the museum).  “I’ve always liked messing with cars, and I like restoring one every two years or so.”

Charlie Birger Memorabilia
The large wooden glass case on the south side of the museum contains pieces from the Birger Legend.  Garage Pulley Equipment
Like many garages of the time period, pulley systems were used to power several mechanical devices.  Our garage has two sets, the large one along the north wall and the smaller one along the west wall.  The smaller set is still connected to its power source, a small generator in the attic.  The large set features a large wooden wheel.

Vaudeville Theater Artifacts
Next to the Huckster Truck are two items recalling Benton’s theatrical past.  The Capitol Theater was located on the southeast corner of the Benton Public Square.  There is a blue ticket booth from 1900 and an early 20th century theater poster advertises an entertainment popular at the time: a minstrel show where white musicians donned burnt cork black face makeup and performed African-American music, jazz, and Dixieland music numbers.  They also performed the Mr. Bones comedy routine.  This is considered politically incorrect now.

Carriages
This carriage is dated from the 1880s and is considered a buggy since it has one seat and four wheels.  The miniature metal buggy is a model of the Amish buggies still used in Saline County.

Clockface Gas Pump
This gas pump style is called a ‘clock face’ and dates 1930s-40s.  As with earlier models, a large glass globe was marked off with gallons.  Gas was manually pumped into the glass globe, then it would ‘gravity-feed’ into the vehicle.

Vintage Signage
There are several beautiful vintage signs on display in the museum, including an original Ford sign from the early years of the Dimond Motor Company.  It was used as a heat shield for an early employee’s home coal stove.  “When it was returned to the museum, there was paint and wallpaper on the other side,” Rea said.

Martin Red Ball Parking Meter
Developed in 1921, the ‘Red Ball Parking Meter’ was developed by Charles Martin.  They were constructed by the tens of thousands in Benton Illinois till the early 1960s and used by major cities all over the US.  The building still stands to the east of All Stars N Stitches.  The one on display is a salesman’s model.  It is still in working order.  The meter is on loan from Ned Mitchell of Benton.

WFRX Radio Station Transmitter
As part of the Beatles history in Benton, the museum houses a 1940s Gates transmitter from WFRX radio in West Frankfort.  The radio station is believed to be the first station in the United States to play Beatles music.  Beatle George Harrison came to Benton and Southern Illinois in the fall of 1963 to visit his sister Louise.  Louise, whose husband was an engineer with the Freeman Coal Company, had taken Beatles records to the station long before the group became famous in the states.  During his visit, George was interviewed at WFRX and the original turntables are on display at the Historic Jail Museum.

On September 21, 2013, the Illinois State Historical Society, in conjunction with the Franklin County Historic Preservation Society, dedicated a historical plaque in downtown Benton marking the 50th anniversary of George Harrison’s visit.  Among those present at a ceremony in Capitol Park was Harrison’s sister, Louise.

Visitor Information
The museum is open from 10:00 am to 6:00 pm Monday through Friday.  There is no admission charge.  However, donations are accepted.  Within walking distance is the Franklin County Jail Museum, which is located at 209 W. Main St.

[i] R. J. Kirkpatrick was the son of a local newspaper publisher and Civil War veteran, R. D. Kirkpatrick. Kirkpatrick Motors was located on East Main Street and was purchased by the Taylor family in the 1950s.

[ii] Known for their durability, Dorts were manufactured from 1915-1924 in Flint, Michigan, by William C. Durant and Josiah Dallas Dort.  They used Lycoming airplane engines to power their vehicles and were considerably more expensive than Fords.

[iii] The Oakland Motor Car Company was founded by Edward M. Murphy and manufactured cars from 1907 to 1909 in Pontiac, MI.  From 1909 to 1931, Oakland became part of General Motors.  Oakland was a forerunner to Pontiac.

[iv] Nash, which were known for their economical price and durability, were manufactured in Kenosha, WI.